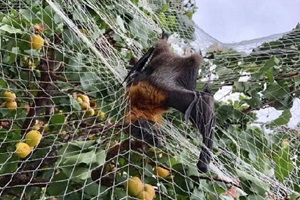 Wildlife trapped in netting is keeping RSPCA South Australia’s team of four rescue officers busy. The team has rescued nine birds and one fox so far this year, but fears there could be many more animals caught in nets that are never found – or not found in time.
In most cases, the netting is being used to protect fruit growing on trees, but there have also been incidents with birds caught in netting and shade-cloths used on sports fields, in playgrounds and around abandoned buildings.
RSPCA South Australia Senior Rescue Officer Nalika Van Loenen said in some instances the birds have already died from injuries and exhaustion. Where birds have survived, they often require extensive veterinary treatment for injuries such as broken wings and legs before they can be released. Sometimes euthanasia is the only humane option.
“It’s truly heartbreaking to come across birds, struggling in vain to free themselves and becoming more and more tangled and injured in the process,” Ms Van Loenen said.
“One can only imagine the shock and fear they experience when they fly into these nets and suddenly find themselves stuck.”
Ms Van Loenen said her team rescues tangled birds from locations right across the metropolitan area. Apart from birds, they have rescued lizards, foxes, bats, possums and even a dog.
In one case this year, the Country Fire Service, Metropolitan Fire Service and State Emergency Services combined forces to rescue a Corella trapped in the frayed edges of shade cloth erected over a playground in Munno Para. Too high to be reached by conventional ladders and with temperatures hovering in the high 30s that day, the bird was suffering heat exhaustion in addition to injuries and, on release, was immediately taken to vets in Roseworthy for emergency care. Despite long odds, the bird made a full recovery.

Corellas rescued from soccer netting at Aberfoyle Park High School this month also survived their ordeal. But around ten birds trapped in netting erected at an abandoned building in Salisbury have died in the past few weeks. This netting has now been removed following a request from RSPCA SA.
“Our suburbs are full of potentially lethal traps as a result of these nets being erected without thought to the dangers they pose for wildlife.
“Most of the netting is over fruit trees, and while we understand that people want to protect their fruit, it shouldn’t come at the cost of injuring or killing wildlife,” Ms Van Loenen said.
“We’d like people to be ‘net aware’ – to identify potential wildlife traps and take steps to remove the risk.

“Our wildlife is precious and we’d hope everyone feels a sense of responsibility to keep it safe.”
RSPCA asks people to:

If an animal is found caught in netting, please contact either RSPCA South Australia on 1300 477 722 or Fauna Rescue on 8289 0896.
RSPCA South Australia applauds hardware stores that have stopped selling wide-holed netting that threatens wildlife, and encourages other stores to follow their lead.
More information about wildlife friendly netting can be found at:
https://www.wires.org.au/wildlife-info/wildlife-factsheets/wildlife-friendly-netting