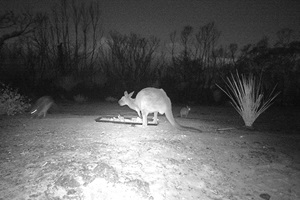 Volunteers assisting in RSPCA South Australia’s wildlife feeding program on Kangaroo Island knew the feed and water they’ve been putting out each day was being consumed – now they know who’s turning up for a free meal.
The organisation has released some of the first images captured since the recent installation of motion-activated cameras at some of the 62 feeding stations set up across the island by the volunteers.
Cameras located within the Kelly Hill Caves Conservation Park, on the island’s south side, caught images of wallabies and kangaroos feeding. Some of the animals appear to be emaciated.
Most of the park and its infrastructure was burnt in the January bushfires, leaving little habitat for surviving wildlife. The park remains closed to the public as the clean-up continues.
RSPCA South Australia’s Field Operations Manager Melanie Lambert, who is leading the organisation’s wildlife feeding program, described the images as “extremely motivating” for the volunteers working hard to distribute feed to animals.
“It’s one thing to return to feeding stations and find everything left the day before has gone, but to actually see native animals coming in to eat has definitely given us all an added boost,” Ms Lambert said.
“These cameras are capturing valuable information to guide us on where we locate feeding stations so that we reach as many native animals in need of supplementary feeding as possible.
“They’re giving us a good idea of not only the numbers of animals we’re catering for in that area but also the different species.
“So far we’ve seen no evidence of feral animals such as pigs or wild cats turning up at our feeding stations, which is very positive.”
During long days concentrated on the island’s more severely affected west side, teams have seen goannas, wallabies, koalas, kangaroos, echidnas, brushtail possums and a wide range of bird species. Equally encouraging has been the increasing evidence of burnt bushland starting to regenerate.
The three volunteer teams, comprising three members each, are working seven-day rosters. All except one of this week’s nine volunteers are Kangaroo Island residents returning for a second or third stint.
Background
RSPCA South Australia’s emergency response on Kangaroo Island began on January 9.
The wildlife feeding program began on Monday February 3. Apart from setting up feed and water stations, volunteers are continuing to:
? Replenish supplies at two feed distribution depots at Parndana and Nepean Bay, south of Kingscote. Islanders who wish to support native animals on their properties are now able to collect feed from either of these depots at no cost.
? Set up shelters (made by volunteers) for ringtail, brushtail and pygmy possums in trees that have no foliage due to the fires
RSPCA South Australia is also providing financial support to local residents and groups who are caring for and rescuing wildlife impacted by the bushfires.
The duration of this emergency response is dependent on the time it takes for native vegetation food sources to regenerate sufficiently to sustain animals that are currently at risk of starvation.