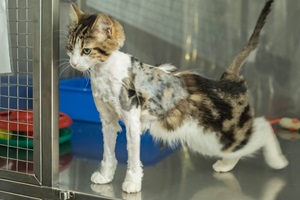 RSPCA South Australia is warning cat owners not to use collars on their animals that do not have a quick-release mechanism. The Society’s veterinary team recently treated two cats found with serious injuries caused by collars that did not have this mechanism. According to RSPCA South Australia Senior Rescue Officer Nalika Van Loenen, incidents of cats being injured by collars that do not open under pressure are all too common. She warned cat owners to take extra care if they wish to put collars on their animals, especially if the cats have access outdoors. “What commonly happens is the cat gets one of its front legs through the collar, and then it’s left struggling on three legs,” Ms Van Loenen said. “If the animal is then not found for several days, or sometimes weeks as we have seen in the past, the collar becomes embedded in the animal’s flesh. “The wound can become quickly infected and can be quite horrific – as was the case with these two poor cats.” In mid-December, a RSPCA rescue officer was called to a Golden Grove veterinary surgery after someone brought in a stray cat with a collar-caused wound infected by maggots. The large wound required extensive treatment by RSPCA South Australia’s veterinary team before it healed. The 10-month-old female tabby – aptly named “Luck” – has fully recovered from her ordeal and is now available for adoption.

Fortunately, the cat involved in the second collar injury incident last month was not as seriously injured as Luck. Nonetheless, the two-year-old female cat called “Asha” required surgery and ongoing treatment by RSPCA SA’s veterinary team. The owner was located, but decided to surrender the cat. Asha has recovered from the surgery and is now also available for adoption. RSPCA SA Rescue Officer Nalika Van Loenen said both cats are lucky they were found in time. “We do not oppose the use of collars because they are another way of identifying ownership of cats, though microchipping is the best identification method to use and it is now a legal requirement to have your cat microchipped,” Ms Van Loenen said. “If owners want to put a collar on their cat, it’s vital the collar has a break-away, safety release buckle because cats have a habit of getting themselves into trouble.”
Ms Van Loenen stressed that it is also important to fit collars correctly, ensuring the collar is not so tight to inhibit breathing but not so loose that the cat can get a front leg through it.

“What sometimes happens is that a cat becomes a stray and loses weight, and then the collar can become dangerously loose,” Ms Van Loenen said. “That may be the case with these two cats – Luck and Asha – because they were both found as strays. “In any case, collars used on any animals must be checked often, especially on young animals because the collar will need regular adjustment as the animal grows.”